The United States Department of Justice initially opened an investigation of conditions at the Oregon State Hospital under the Civil Rights of Institutionalized Persons Act in 2006. In late 2010, we expanded our focus to look at Oregon’s broader mental health system pursuant to our authority under the Americans with Disabilities Act (“ADA”). This expanded investigation included examining the community services and supports available to persons with mental illness throughout Oregon.

READ – Letter to all mental health advocates: DOJ v PDX settlement mediation
READ – articles and documents about the DOJ in Oregon
READ – Testimony to fairness of settlement of United States of America v. City of Portland

Shortly after we began our expanded investigation, Oregon announced a transformation of its healthcare system to include integration of the systems for delivering physical and mental health care, expanding the number of individuals and services covered under the Oregon Health Plan, and ensuring improved quality of services through an outcome-driven system. The transformation is designed to shift financial incentives from acute care to prevention, wellness, and community-based management of chronic conditions – which is exactly the point of our ADA investigation, in which we are determining whether Oregon’s mental health care is being provided in the most integrated setting.  Oregon leadership and the Department agreed that this health transformation process – if it includes a focus on helping people with serious and persistent mental illness achieve positive outcomes through the provision of critical community services – provided a unique opportunity, through a cooperative process, to ensure that Oregon meets that integration mandate of the ADA as interpreted by Olmstead v. L.C., 527 U.S. 581 (1999).

In order to resolve our investigation, the Department and the State agreed to a process to ensure that the health transformation initiative brought about changes to the Oregon mental health system necessary to en sure that people were not placed at a risk of unnecessary segregation.

The agreement included a three – part process. In the first year, largely, although not exclusively through the managed care provider contracts, the State would collect data that would permit the mapping of services and outcomes. This was essential to the reform because statewide data was largely unavailable and the State did not have information essential for the planning process. Once the data was collected and the systems understood, the parties agreed to discuss intermediate metrics to be placed in provider contracts. These would include a minimum array of services necessary to meet the known needs. We agreed that this was a necessary step to transition to a system driven solely by outcome measures. In the final phase, we would work together to develop outcome measures that would be guided by individual and community health. These would be included in the provider contracts and would not measure the quantity of each service, but rather set standards to measure whether the systems are supporting people in the community and preventing unnecessary segregation. As provided by our November 9, 2012 agreement, Oregon has submitted quarterly data and information to the Department regarding system development and outcomes regarding community mental health provisions.

We also met with State officials in late March 2013 and 2 have had various discussions throughout the year regarding the data provided by the State. This report addresses our initial analysis of that data.

That has led to a predictable result – Oregon is not yet transitioning to a community – based system. The State’s data reveals that funding for mental health services is not yet shifting away from costly restrictive institutional settings to more effective, less costly community settings.

The State has long been aware of the gaps in its community mental health system. In 2008 and 2009, the Legislature and the Department of Mental Health funded reports from various workgroups and consultants that document the gaps in the system. (Footnote 1) For years, the Department has repeatedly raised this same concern with Oregon leadership. We were assured that the State was committed to moving to a community-based system of providing mental health care.

Certainly, serving individuals with highly complex mental health needs is best done through a person-centered approach delivered through an array of effective evidence-based community services. Furthermore, this approach best preserves State general funds and is more effective than institution-based services. While State officials have expressed their desire to create a community-based mental health care delivery system, this is not yet happening. We look forward to working with the State to now redirect its focus and efforts to make community-based mental health services a reality in Oregon.

Despite the stated commitment to transform to a community-based system, the data provided demonstrates that there has not been an increase in the provision of community-based mental health services. As the State develops community services, we would expect to see an increase in the amount of community-based mental health services (service units) being provided and a decrease in the amount of institution – based services. This expected increase is not evident. Indeed, as demonstrated in Chart 1, the quantity provided for most community services has essentially stayed the same during 2013, and in the case of supported housing, has actually decreased. 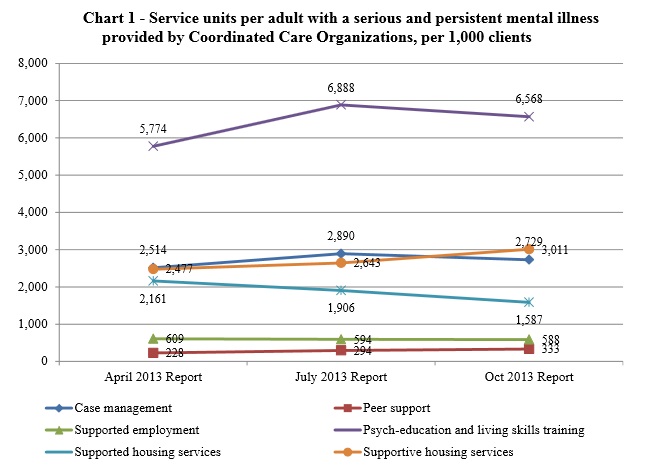 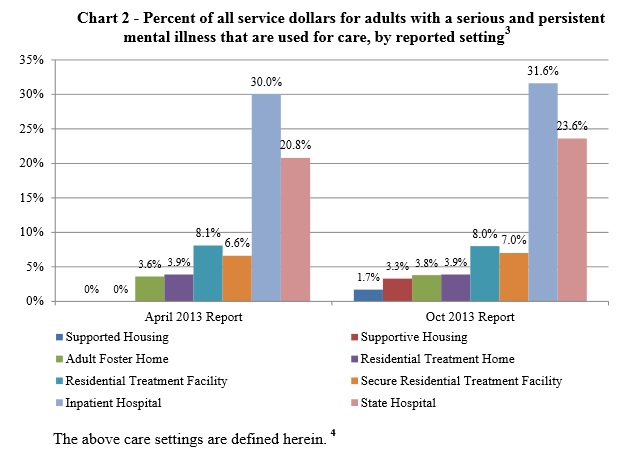 Significantly, as the State itself recognizes, the movement from an institution-based system and a subsequent reinvestment into a community-based system will result in major savings. This is because the cost of providing care at the state hospital is significantly higher than the cost of providing individualized services in the community. For example, with an estimated cost of care at Oregon State Hospital of $945 per day, (Footnote 5) the annual cost of a state hospital stay is approximately $344,925 per person. Given that care provided by the state hospital is generally not reimbursable through Medicaid or other insurance, these costs have largely been borne by the State of Oregon.

In contrast, providing services to individuals in the community would not only lower cost, but would draw down federal dollars through Medicaid or other programs. For example, a national estimate of the average annual total cost of effectively supporting an individual in the community with Assertive Community Treatment services is about $15,000. (Footnote 6) Taking into account that ACT services are reimbursable through Medicaid and draw federal dollars, the costs to Oregon are only approximately $5,634 per person annually. The table below summarizes annual projections comparing inpatient hospitalization with intensive community services. 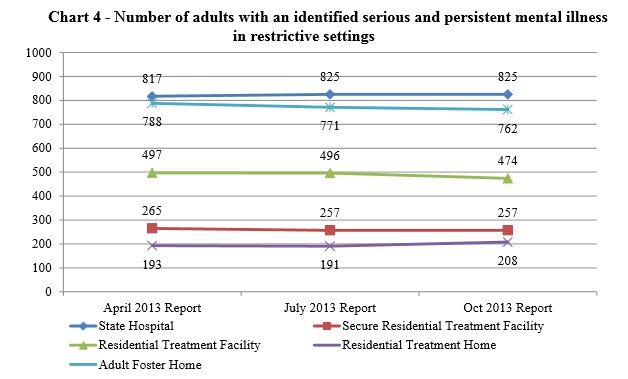 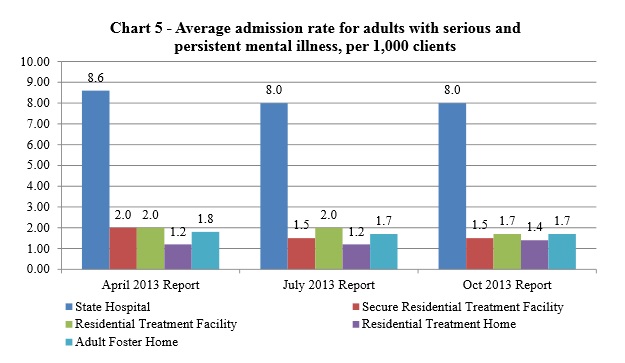 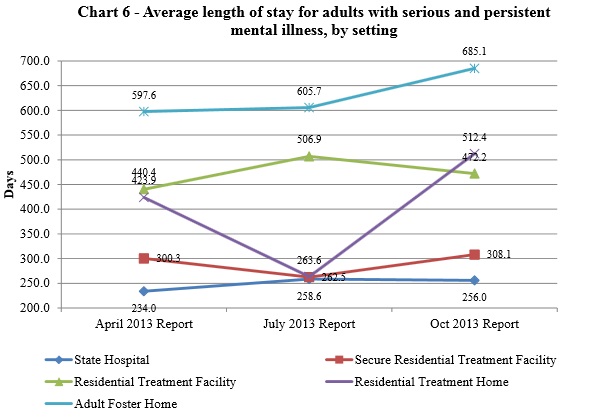 In addition, the State’s data (Chart 8) shows only a minimal decline in the number of consumers seeking emergency room services. Again, if the State were following through on its stated goal of investing in preventative community-based services, we would expect to see the number of emergency room visits for individuals with mental illness start trending significantly downward. As evidenced by the data, this has not happened. Furthermore, while the number of total emergency room visits may appear to have decreased somewhat, the number of consumers using community-based crisis stabilization services (such as mobile crisis teams and walk-in crisis centers) has not increased as shown by the State’s data for System Development Measure 3, evidencing a lack of intended outcomes. 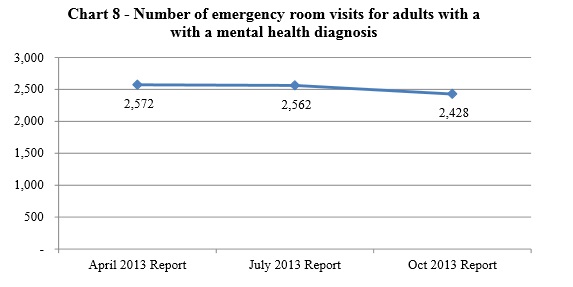 IV. Utilization of Community-Based Mental Health Services by Adults with a Serious and Persistent Mental Illness

Chart 9, below, summarizes the key community-based services that Oregon reports providing to people with serious and persistent mental illness, either through its counties or through managed care organizations – predominantly the fledgling Coordinated Care Organizations, but to a lesser extent Mental Health Organizations and fee-for-service providers. An analysis of the data provided calls into question both the accuracy of the data and suggests that the high quantity of services that Oregon is reporting in some parts of the state do not meet evidence-based models for quality. 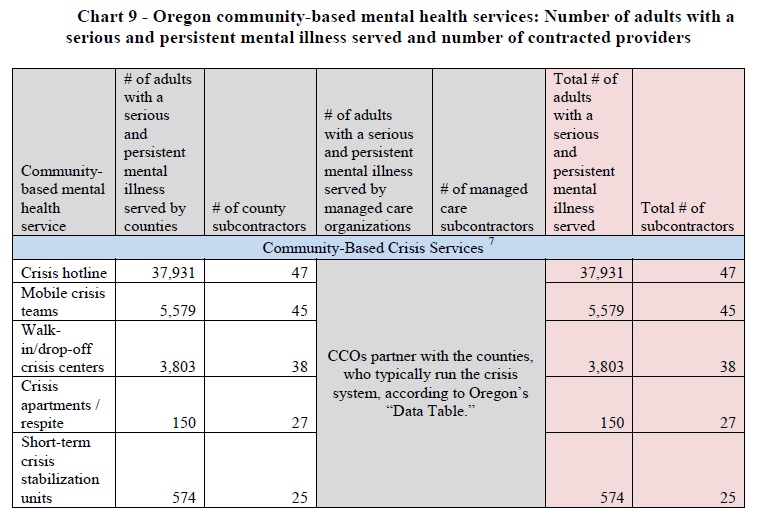 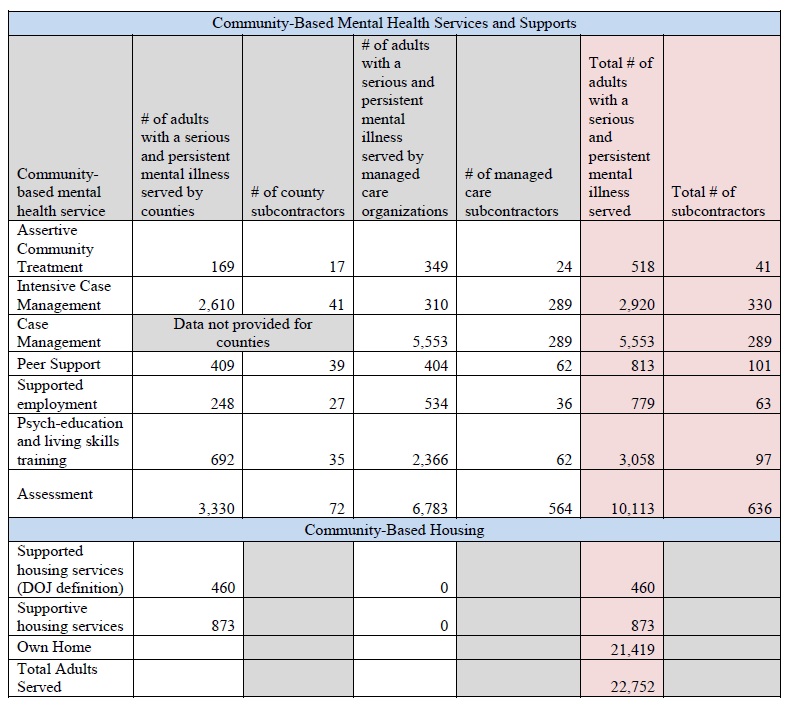 In conversations with Oregon since this data was provided, State officials were confident that the information provided is accurate. The data regarding Intensive Case Management illustrates why some of the data may be flawed. If the information provided is accurate, Oregon provides this service to almost 3,000 individuals – the vast majority of whom receive Intensive Case Management through the counties. The counties are reported to have 41 subcontractors – which the State asserted represents 41 teams – providing services to 2,610 individuals. The managed care organizations are reported to have 289 subcontractors or 289 teams, serving 310 individuals. Thus, the counties have an average case load of 64:1 which is more than 60 times greater than the caseload provided by the managed care organizations for the exact same service. Although it is likely the discrepancy arises from how managed care organizations count the number of subcontractors providing ICM, the data shows an obvious discrepancy.

In addition, the data reflects the inadequacy of the totality of services currently being provided. Given the total number of adults with a serious and persistent mental illness being served in the community, the level of services that they are receiving is extremely low. For example, we would expect that most of these individuals would receive some type of case management or care coordination. The data reveals, however, that only 41% of these individuals received case management or care coordination services.

Setting aside the accuracy issue, the current service population data illustrates a critical point: many service teams in Oregon report caseloads dramatically lower than what we have seen in states using evidence-based models. 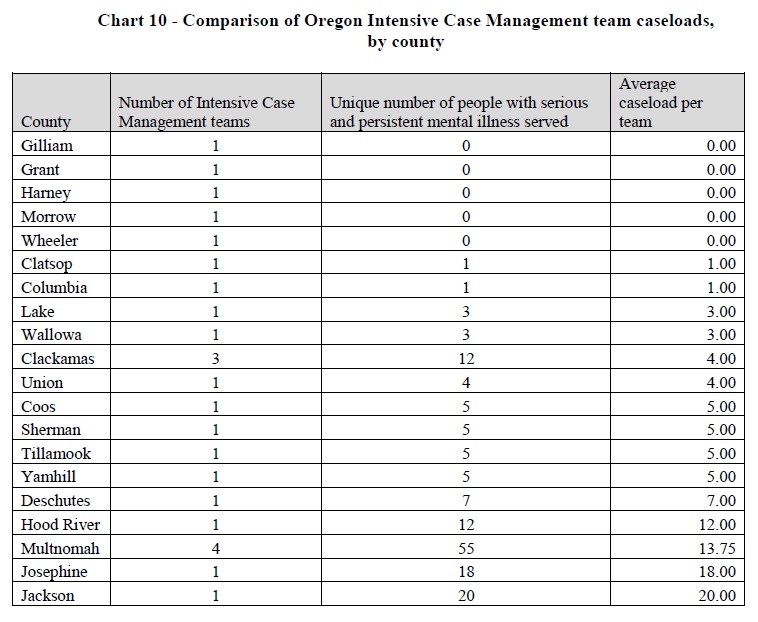 As shown in Chart 11, below, the ACT team caseloads are similarly low and reflect substantial variation among ACT providers. These caseload numbers are not consistent with full-fidelity ACT services, which typically serve a caseload of 75 to 100 people per ACT team. In Oregon, ACT teams serve, on average, 10 people. (Footnote 8) When broken down by provider, though, the caseloads vary wildly. The data also raises the question of whether there are sufficient ACT services in the State. For instance, Multnomah County ACT team serves only 25 of the roughly 13,173 estimated adults with a serious and persistent mental illness in the county. (Footnote 9) By any measure, this is woefully inadequate as researchers have estimated that ACT teams should be provided to between 20-40% of those with serious mental illness. (Footnote 10) Given that consumers with serious and persistent mental illness present greater needs than people with serious mental illness do, that number may need to be even higher, particularly when there has previously been a high rate of institutionalization. 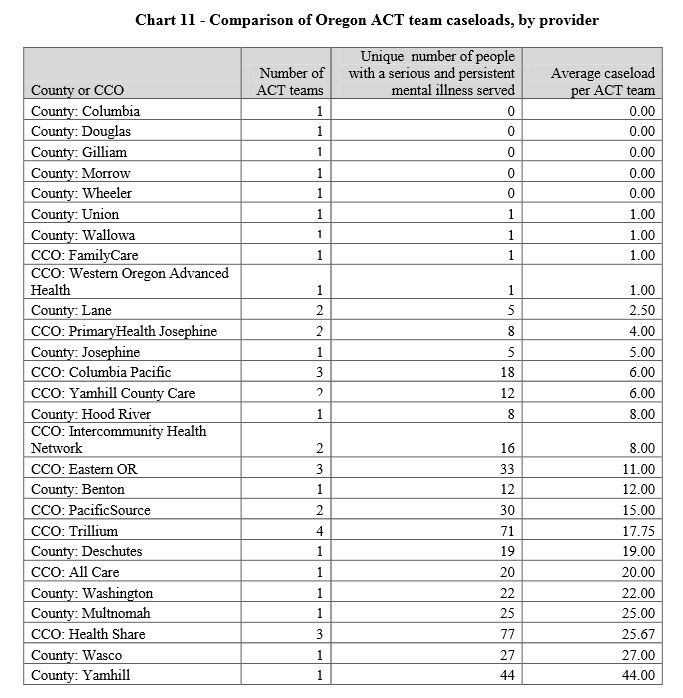 Although the accuracy of the data provided by Oregon over the past year is concerning, our review of intended outcomes does show substantial gaps in the community mental health services being provided. Despite our expectation that changes in the service system would help reduce Oregon’s reliance on institutionalization, that key outcome for consumers has not taken hold. Likewise, key consumer outcomes in general have not appeared to improve over the past three quarters. Further, despite data reporting a high quantity of some services, the data suggests those services likely do not meet the quality of evidence-based models for care. Oregon is far behind where it needs to be in providing the high-intensity community services that are most necessary for serving people with serious mental illness in the most appropriate integrated settings.

2. During calendar year 2013, as evidenced in Chart 2, service dollars spent on care of adults in institutional settings increased from 69% to74% according to data provided by the State for System Development Measure 9, items D-H. The reported data demonstrates that the State continues to spend a vast majority of its service dollars for adults with serious and persistent mental illness on restrictive settings, including the state hospital and smaller secure settings.

8. Assuming full- fidelity, these lower caseloads would result in extremely high costs per individual – way beyond what we would expect for full-fidelity, evidence-based ACT teams.

11. We have reached out to the State about this issue. Oregon informed us that it expected to provide us this breakdown by January 1, 2014, but we have not yet received this information. Receiving this information will assist in conducting a mapping of services throughout Oregon.