A Portland police sergeant testified Thursday that he saw a similarity between Officer Dane Reister‘s mistaken firing of a lethal round from his beanbag shotgun in 2011 and a firearms mix-up Reister made years earlier during training. 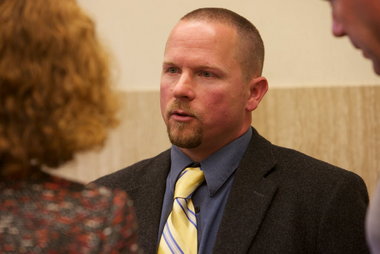 In both cases “a round was fired improperly out of a weapon,” Sgt. Kraig McGlathery said in Multnomah County Circuit Court.

Five years before seriously injuring a 20-year-old man in Southwest Portland with his beanbag gun, Reister mistakenly struck a fellow officer posing as a protester with a smoke round fired from a 37 mm TL-1 launcher during a crowd-control training drill.

Reister pulled the trigger of the launcher to simulate a so-called skip round that’s supposed to bounce off the ground, but it was loaded with an 80-yard smoke projectile that struck Officer Zach Kenney in the leg, causing a minor bruise.

Prosecutors Jeff Howes and Norm Frink want to admit Reister’s earlier mistake into evidence in his pending trial on assault and negligent wounding charges that stem from last year’s shooting.

A Multnomah County grand jury indicted Reister on third-degree assault and fourth-degree assault after the June 30 shooting. The indictment marked the first time in the county’s history that a grand jury has brought criminal charges against a Portland officer for use of force in the line of duty. It also comes as the police bureau’s use of force is under federal review.

Reister, 40, a 15-year Police Bureau veteran, has pleaded not guilty to all of the charges. He remains on paid administrative leave, pending the trial.

His lawyer, Janet Hoffman, argued that the two mistakes aren’t as similar as prosecutors suggest. While Reister “forgot there was a projectile” in his launcher during his training in 2006, he “misloaded” his beanbag shotgun last summer, she said.

Reister received a letter of reprimand for unsatisfactory performance for the error that occurred during his training as a “grenadier” with the Police Bureau’s Rapid Response Team at Camp Rilea.

A reprimand is “to give guidance to the officers so it would not happen again,” McGlathery testified as a witness for the state.

The 2006 tactical commander also found fault with the lieutenant “who allowed a fired projectile into the training exercise,” according to a police memo entered as evidence.

Reister’s attorney pointed out that the bureau gave Reister no additional training and didn’t change safety protocol for such crowd-control drills after the mistake.

Further, she called as a witness retired Portland officer Stephen Rickeard, who had served as an administrative officer for the Rapid Response Team.

Rickeard said it wasn’t standard practice to allow any rounds loaded into 37 mm launchers during training drills, but he learned later that a captain had authorized live rounds to be used during the Oct. 24, 2006, drill at Reister’s request.

After Reister’s error, Rickeard said, there was no “debrief” of the incident among Rapid Response Team members. “We had no written safety policy for the team,” he testified.

At the hearing, Reister didn’t sit beside his lawyers, but chose instead to sit in the back of the courtroom. Multiple police officers, including Capt. Todd Wyatt, came to support him.

In last year’s shooting, Reister responded to a 9-1-1 call of a man with a pocketknife threatening children at Lair Park. Reister spotted William Kyle Monroe on Southwest Naito Parkway and ordered him to show his hands. When he refused, Reister got his beanbag shotgun from his car. When Monroe ran, Reister chased him and fired four lethal shotgun rounds from the beanbag shotgun. Only when he approached Monroe did Reister realize the man was bleeding and that he had fired lethal rounds.

Monroe suffered two entry wounds to his left thigh; one of the two was a “through and through” shot. Another hit his buttocks, shattering his pelvis and puncturing his bladder, colon and injuring his rectum, his lawyer said.

In court, Reister’s lawyer called OHSU assistant professor of psychiatry Leesa Maron, who said humans’ “visual attention” is faulty. It was a point Hoffman sought to make to show how easily Reister could have mixed up the yellow-painted beanbag shotgun rounds with red-painted lethal rounds when loading his beanbag shotgun inside his patrol car in a dark garage.

“‘Look-but-fail-to-see’ errors happen all the time to people who are diligent, thoughtful and bright who think they’re paying attention,” Maron testified. “In a dimly lit garage, the contrast between a red and yellow shell is markedly diminished.”

Further testimony will be heard in July.