A new report released June 17, 2019 from Disability Rights Oregon’s Mental Health Rights Project reveals that Portland-area hospitals rely on the police to arrest and remove patients with mental health conditions who are seeking care or have been recently discharged. The report is titled, “The ‘Unwanteds’:Looking for Help Landing in Jail.”

DRO and Metropolitan Public Defenders filed suit against the State of Oregon in June 2019 on behalf of inmates with mental illness languishing at Washington County Jail. 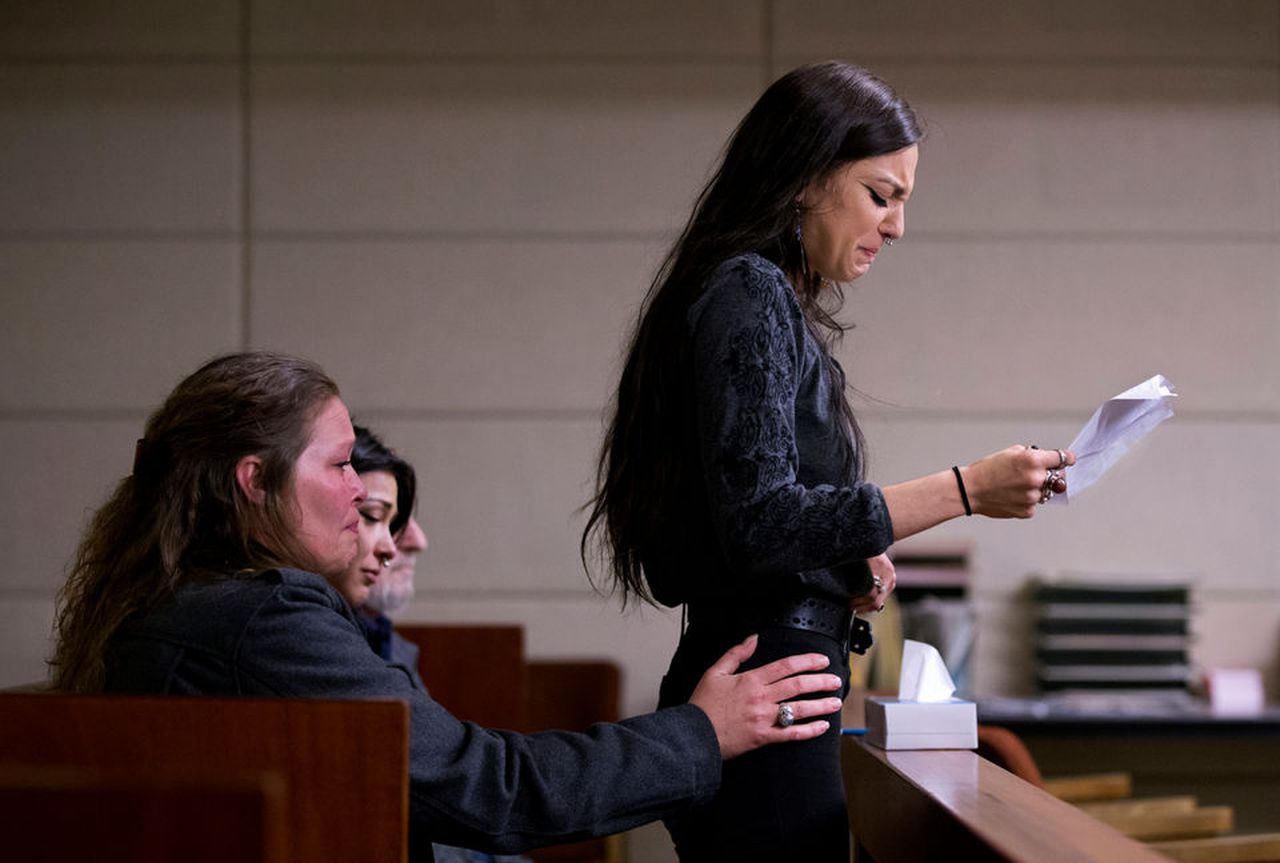 Kaila Yandell, whose older brother battles mental illness and was spending his 50th day in jail over nuisance crimes related to his disease, pleads with a Portland judge to free him.

Early one Monday last November, police arrested Kobe Yandell for napping in the lobby of a downtown Portland skyscraper. Officers took the wiry 21-year-old, who is homeless and has schizophrenia, to the Multnomah County jail, where he spent the next 52 days in isolation.

A trespassing conviction normally carries little or no jail time. Yandell spent more than seven weeks locked up alone, yet had not been convicted.

Instead, he was awaiting admission to Oregon’s public psychiatric hospital in Salem for a court-ordered evaluation, the usual first step for a defendant like Yandell, deemed by a judge too mentally ill to stand trial. It was familiar territory for him. Just seven months earlier, a judge had sent Yandell to the state mental institution to get healthy enough to face two other low-level cases.

Yandell is not alone in languishing in jail or the mental institution despite never having been convicted of a crime. In Oregon, it is not uncommon for mentally ill defendants to spend more time confined for being ill than they would ever serve behind bars for the crimes they are accused of.

That system is costly and largely ineffective.

Oregon routinely violates a federal court order that requires mentally ill people who get charged with crimes to be admitted promptly to the state mental hospital, an analysis by The Oregonian/OregonLive has found.

The frequent delays, some of them lasting more than a month, trample the rights of mentally ill people accused of minor or serious crimes, as judges have ruled they cannot be left to languish in county jails.

Since January 2018, court, jail and hospital officials collectively failed more than 200 times to get people out of jail and into treatment within the court-ordered seven-day timeline, The Oregonian/OregonLive found by analyzing data obtained under a public records request.

The reasons for the unlawfully slow admissions: a lack of available beds at the institution, late filing of paperwork by county court officers, delays on the part of county sheriffs to schedule transport to the Oregon State Hospital in Salem, and, in two cases, bad weather.

The state of Oregon came perilously close to being found in contempt of court Wednesday for ignoring a Washington County judge’s orders to evaluate a defendant’s mental health. Though a contempt ruling was not issued, the possibility lingers.

Wednesday’s proceedings laid bare Oregon’s failure to uphold the due process rights of defendants with mental illness by allowing them to languish in jails while awaiting treatment – sometimes for months on end.

Attorneys in Portland revived a 17-year-old federal court case Friday, saying in new motions that Oregon officials are infringing upon mentally ill defendants’ rights in violation of a court order and should be held in contempt.

The 2002 case, Oregon Advocacy Center v. Mink, established that mentally ill people charged with crimes cannot be left in jail indefinitely as they await treatment so they can assist in their defense. They must instead be admitted to the Oregon State Hospital within seven days.

‘We have no solution’: Grim state of Oregon mental health system laid bare in court
Oregonian – May 20, 2019

An assistant state attorney general described in stark terms the dismal state of Oregon’s treatment of mentally ill defendants when chastised by a judge Tuesday for disobeying court orders.

The state lawyer, Craig Johnson, did not contest that defendants’ constitutional rights are being trampled. But, Johnson intimated, no one in state government knows quite what to do about it.

“We have no solution,” he said.

The contempt ruling, issued by Judge D. Charles Bailey of the Washington County Circuit Court, is the clearest rebuke yet of the state’s lapses in handling the rise in criminal cases with mentally ill defendants.

A judge said Tuesday the Oregon State Hospital is in contempt of court because defendants ordered to receive treatment there instead languished in jail.

Washington County Circuit Court Judge D. Charles Bailey found that the state hospital “willfully violated” his order to admit inmates being held in the Washington County Jail. He ruled the hospital took too long to get several defendants admitted.

“Based on evidence presented and the current law, the court finds OSH in contempt for willfully violating the court’s orders,” Bailey wrote in his decision.

Oregon now has more than enough evidence to show that its methods of treating mentally ill people charged with crimes aren’t working. But is the state legislature the right arena to fix the lacking system?
On Tuesday, a Washington County judge held the Oregon State Hospital (OSH) in contempt of court for violating orders to admit defendants into the facility within a week of a judge deeming them mentally unfit to stand trial.

Judge D. Charles Bailey found that state officials knowingly allowed four mentally ill defendants to languish in jail for more than seven days before moving them to the state hospital. The defendants each had individual and unrelated cases. Bailey said that one of the defendants remained in jail for over a month while his “mental status deteriorated.”

The Oregon Health Authority released a proposal Friday for how it will deal with the backlog of jail inmates trying to get mental health treatment at the Oregon State Hospital.

Right now, there are 44 people who judges around the state have deemed in need of mental health treatment before they can aid in their own criminal defense. They’re waiting inside jails until they can get admitted to the state’s psychiatric hospital.

In a two-page memo to staff, OHA Director Patrick Allen said they’re taking steps to reduce the time people are waiting to be admitted and speed up the discharge process for those who no longer need hospital-level care. He also stressed the need for funding from state lawmakers for community based mental health services.

The plan comes days before the state is due in federal court in Portland over the issue.

A federal judge has declined to hold Oregon in contempt of court for defying a longstanding court order that requires speedy admission of mentally ill defendants to the state psychiatric hospital.

The judge, Chief U.S. District Judge Michael W. Mosman, said in court documents Wednesday that he will review the issue again in about 90 days to see if senior state officials made good on promises to quickly implement reforms.

In a ruling issued Wednesday, U.S. District Court Judge Michael Mosman declined to find the state in contempt of a longstanding federal court order that dictates admissions for people with mental illnesses at the Oregon State Hospital.

Mosman’s ruling comes despite the state being out of compliance and over the objections of mental health advocates currently suing the Oregon Health Authority, which oversees the hospital, because of the delays.

In Portland, some people seeking help at a hospital will be treated by a doctor and leave with a long-term plan to address their specific health needs. Others might get the cops called on them.

A new report by Disability Rights Oregon (DRO) reviews every instance—over the course of one year—where officers with the Portland Police Bureau (PPB) were called to one of six local hospitals to address what hospital staff call an “unwanted” person. In police terms, these are people who appear to be violating Oregon’s criminal trespass law by not leaving the hospital after being asked to leave.

Portland hospitals are using trespassing laws to have “unwanted” people removed by law enforcement, according to a new report from Disability Rights Oregon.

When someone is asked to leave a hospital and they don’t, they can be arrested under the criminal trespass statute. These calls are often characterized as “unwanteds,” according to DRO. Some are excluded from the hospital for 30 days and some permanently.

A prominent advocacy group has called on six Portland-area hospitals to change policies that lead to homeless or mentally ill people being jailed for trespassing on hospital grounds — often because they are seeking help.

The group Disability Rights Oregon on Tuesday, June 18, released a 37-page report detailing its analysis of 142 trespass arrests at local hospitals over a one-year period starting in the summer of 2017.

Among the group’s findings:

At least two dozen people remained jailed in violation of their constitutional rights as a result of Mosman’s indecision, said Jesse Merrithew, the lead attorney for the public defender office.

“Throughout this state, severely mentally ill people remain in jail cells despite the fact that everyone agrees that it is unconstitutional for them to remain in jail,” Merrithew said in a statement.

The appeals court “has the power to stop this injustice,” he said, arguing in the motion that harms to defendants caused by the jail stays “require immediate court action.”

It’s unclear if the Ninth Circuit will take up Merrithew’s motion or reverse Mosman’s ruling.