Brady Hammer, an Oregon National Guard soldier who died in Texas on July 28 from what El Paso police say was a self-inflicted gunshot wound, was a “happy-go-lucky person,” according to his sister.

But the 24-year-old’s moods were affected by a confusing cocktail of medications prescribed by his doctors at the Warrior Transition Unit at Fort Bliss, where he had been treated for post-traumatic stress disorder, said his sister, Lacee Valentine of Grants Pass and his mother, Marie Hammer of Klamath Falls.

He died in the off-post apartment he shared with his girlfriend. The military is continuing to investigate the case. His sister and mother think Brady didn’t know there was a bullet in the gun’s chamber. But they don’t know for sure.

What is known is that Hammer is the fourth member of the Oregon National Guard to die of a gunshot wound this year. After two years with no Oregon Guard suicides, it’s a startling uptick.

“This many in such a short period of time is unacceptable,” said Guard spokesman Capt. Stephen Bomar. The Guard is stepping up a mental health awareness campaign, he said in a phone interview this month, which the Department of Veterans Affairs has designated Suicide Prevention Month.

The spike in self-inflicted Oregon Guard deaths reflects a national trend. Rates of military suicides have been rising even as the armed services are working harder to prevent them.

A 2012 VA study suggests that about 8,000 military veterans kill themselves each year — a rate of 22 a day. Among the still-serving, the rates have risen steadily since the beginning of the wars in Afghanistan in Iraq. The Defense Department’s Suicide Event Report for 2011, the most recent available, said that 301 active-duty service members killed themselves that year, and 915 attempted suicide. Those numbers don’t include figures for the National Guard and Reserves.

The four Oregon cases appear to have little in common. While all were young, three had served in Iraq on two separate deployments, one lived in Hermiston, one in Clackamas and Hammer, from Klamath Falls, was in Texas on federal status. The fourth was a female cadet at Southern Oregon State University in Ashland. 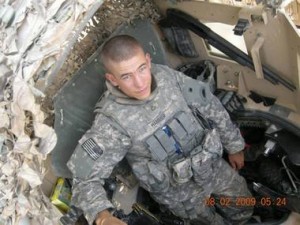 Brady Hammer, then a Private First Class, stands in the turret of a vehicle in Iraq in 2009.

Bomar said the first three have been determined to be suicides. In addition to Hammer, the victims are:

Nicole M. Silva, 20, of Ashland shot herself to death in the parking lot of a Southeast Salem hotel Jan. 5. The Oregon National Guard counts her as a member because she was recruited as a cadet in the ROTC program at Southern Oregon University, where she was a full-time student.

Clifford James Auvil V died at age 23 after he shot himself at his home in Stanfield, Ore., March 23. He served with Oregon’s 3rd Battalion, 116th Brigade in Iraq from September 2010 to September 2011.

Chad Fike, 22, died July 8 at his apartment in Clackamas. He, too, belonged to the 3rd of the 116th and deployed along with Auvil. He died while his unit was at annual training in Idaho this summer.

While every case is different, suicide is often the final, irrevocable step taken after smaller manifestations of depression or post-traumatic stress disorder. Troubled people may be tipped over the edge by problems with relationships, for example, or brushes with the law. They may show flashes of irrational anger, suffer memory problems or exhibit hypervigilance. They may medicate themselves with alcohol or drugs.

Mental health professionals say such behaviors can signify a deeper problem. That’s why the military services, including the Oregon Guard, ask friends and family to pay attention to such warning signs. With timely help, psychological wounds can be healed or, at least, diminished.

Officers working to address mental health issues among members of the Oregon Guard say that neither Silva, Auvil nor Fike were identified to them as being troubled. But they said they have worked with 17 Guard members since last October who acknowledged that they had considered killing themselves. Those 17 are still alive.

“We know what the signs are,” said Col. Leah Sundquist, the Oregon Guard’s director of personnel. “We want to make sure we can identify the individual.”

Sundquist and Lt. Col. Tim Deckert, the deputy commander of the Guard’s medical command, said the Guard is working in multiple ways to build awareness of the danger signs and encourage people to come forward when they’re suffering psychologically.

The problem is that people spiraling into danger may not be willing to acknowledge it. In the military, especially, self-reliance and strength are positive attributes. For many, admitting to an unseen weakness doesn’t fit the picture.

At the funeral service for Brady Hammer in Klamath Falls this summer, Travis Nelson, a cousin of Hammer’s delivers the salute to Marie Hammer, Brady’s mother, who holds the folded flag in her lap.

“We want soldiers to be courageous enough to come forward,” said Sundquist. If they do, she said, “we will get them some help.”
Pre-emptive help

The Oregon Guard started a troop reintegration effort soon after the first units started coming home from war in the last decade. It has grown into a more robust program that involves chaplains, contracted social workers, family support liaisons and others. It is meant to provide multiple doorways for troubled members to walk through.

“Not every soldier connects in the same way,” said Sundquist. “We have a lot of resources. If one part can’t help, another can.”

The programs, under the umbrella title of Ready and Resilient (R2), are meant to work through family members, squad leaders and commanders. They strive to touch service members at different points in the emotional health cycle, from during overseas deployments to Oregon drill weekends and times in between.

And, given the turnover in the ranks and the progression of individual problems, the effort to educate Guard members and their families “is lifelong,” said Sundquist.

Around the state, Brady Hammer’s friends and relatives still can’t grasp the fact that he’s gone. They knew he was having some problems, but that he had been treated by Army medical officials. They hoped he would be fine.

“We knew he needed help,” said Lacee Valentine, his sister. But when he died, “everybody was surprised.”