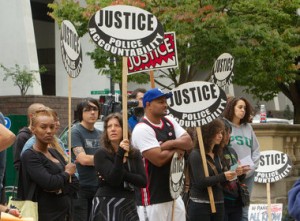 WHAT:     Support for City Council members as they vote on whether to appeal Ronald Frashour’s rehire

The Albina Ministerial Alliance (AMA) Coalition for Justice and Police Reform is putting out a call to action for community members to come to City Council Chambers (1221 SW 4th, 2nd floor) on Thursday, October 4 at 2 PM to support the Council’s proposed vote appealing the recent Employment Relations Board ruling to rehire Officer Ron Frashour.

In the long efforts to bring justice to Aaron Campbell, who was shot by Officer Frashour in the back nearly three years ago, and to create a just system that allows our elected officials to fire an officer for a wrongful shooting and keep them fired, it is important for the community to let Council hear our voices. It certainly would be unfortunate if the only people voicing their opinion to Council were the Portland Police Association and their supporters.

For those interested in staying after the 2 PM agenda item, the Council will be considering the tentative extension of Dr. David Corey‘s contract as the police psychologist.

In a separate email, the AMA Coalition also announced its monthly meeting (5 PM) and a Forum on the Department of Justice Report (6 PM) also taking place on the same day (Thursday).