A man shot and killed by a police officer took nine bullets to the head, neck, chest and right hand when he refused to put his hands up during a suspected methamphetamine deal earlier this month.

Deschutes County District Attorney Mike Dugan announced Wednesday that Bend Police Detective Tom Brown was justified in shooting Refugio Cruz-Fuentes on May 2 as he sat in the back seat of a sport utility vehicle. 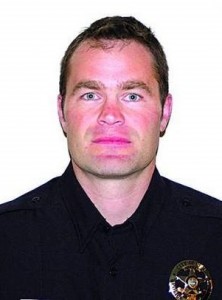 After two detectives with guns drawn repeatedly instructed him in English and Spanish to put his hands up, Cruz-Fuentes calmly reached into his jacket, Dugan said.

Dugan issued a summary report Wednesday of an investigation into the shooting headed up by Oregon State Police .

A review of online Oregon court records showed that Cruz-Fuentes had no criminal history in the state.

READ – Man killed by police had no gun, Bend man appeared to be reaching for weapon when veteran officer shot him during a drug bust, DA says, Bend Bulletin May 04. 2008
READ – Bend police identify officer in fatal shooting, Oregonian, May 4, 2008

The report says that high levels of methamphetamine found in Cruz-Fuentes’ system during an autopsy may have caused him to behave irrationally just before the shooting.

Cruz-Fuentes had been caught up in the middle of a major drug-dealing investigation when he went with accused drug dealer Jose Rogelio Acuna-Espitia on a suspected methamphetamine delivery in the early morning hours of May 2.

Narcotics detectives had served a search warrant at the home – in the 1800 block of Northeast Wichita Way in Bend – the night before.

After taking Cossette into custody, drug detectives raided the house and found cash, drugs and guns. Cossette agreed to call his supplier for an additional delivery of methamphetamine, according to the report.

Acuna-Espitia responded to that call at about 12:20 a.m., according to investigators. He drove to the home in a Nissan Xterra with a female front-seat passenger and Cruz-Fuentes in the back seat, behind the driver’s side, Dugan said.

Investigators arrested Acuna-Espitia as he ran toward the house. Prineville Police Detective Jeffrey Frickey went to the front of the Xterra and yelled repeatedly at the female passenger and Cruz-Fuentes in English and Spanish to put their hands up, Dugan said.

Brown came to assist, Dugan said, and repeated the commands.

“Mr Cruz-Fuentes refused and reached across his body with his right hand,” the district attorney’s report said. “Detective Brown then yelled “drop the gun!” and shot Mr. Cruz-Fuentes with his handgun. The bullets fired entered Mr. Cruz-Fuentes’ left side and caused his death immediately.”

During an interview with officials investigating the incident, Brown said he “felt his body go cold” just before he fired at Cruz-Fuentes.

After he was killed, detectives found a pack of cigarettes in Cruz-Fuentes’ left hand and a cigarette lighter between his legs, according to the report.

They also found half an ounce of methamphetamine in his pocket, an amount Oregon law defines as a “commercial quantity,” Dugan’s report said.

After the shooting , the female passenger told police that she thought Cruz-Fuentes was carrying a gun on the night of his death, Dugan said. She said she watched Cruz-Fuentes as he reached into his coat and thought he was going for a gun.

The woman also told investigators she instructed him in Spanish to put his hands up before he was shot.

Baxter said Wednesday that Brown had never before fired his weapon in the line of duty.

She said that Brown, who is on administrative leave, will be required to attend at least one mental health counseling session before returning to work.

Baxter could not say when that would be, but said that Brown would return to his regular duties as a detective and continue to serve on the drug enforcement team when he returns to work.

Frickey remains on administrative leave, according to Prineville Police Chief Eric Bush. Detective Michael Sundberg of the Deschutes County Sheriff’s Office and Redmond Police Detective Lee Gilbert, who also was present when the shooting happened, have returned to limited duties.

Cossette, who lived at the Wichita address, has not been charged with any crimes in connection with the incident. Prosecutors are looking at the case to decide whether he should be charged in federal court, Dugan said.

Acuna-Espitia, who drove the Nissan the night of the shooting, has been charged with delivering and possession of methamphetamine as well as identity theft and having forged identification. He is being held at the Deschutes County jail under an illegal immigration hold and is scheduled to return to court May 28.

Inside the investigation and shooting May 1 May 2

Cossette, 32, has suspected methamphetamine and a glass pipe in his pickup. Cossette is taken into custody.

A judge issues a search warrant for Cossette’s residence in the 1800 block of Northeast Wichita Way in Bend.

Approximately 9 to 10 p.m.: Sundberg briefs CODE detectives at the Bend Police Department on the search warrant. Bend Police Detective Tom Brown is assigned to gain entry to the house and search it along with other CODE team members.

12:21 a.m.: A Nissan Xterra with three people inside pulls up in front of the house police are searching. Acuna-Espitia gets out of the driver’s side and runs toward the door, where detectives take him down and arrest him. Acuna-Espitia struggles with Brown and Sundberg as Prineville Police Detective Jeffrey Frickey approaches the Nissan with his gun drawn, yelling at the remaining passengers to put their hands up. Frickey repeats the instructions in English and Spanish. Brown approaches the sport utility vehicle with his gun drawn. The female front-seat passenger, Alaina Lehner, puts her hands up but the driver’s side back-seat passenger, Refugio Cruz-Fuentes, does not. Cruz-Fuentes, 28, reaches across his chest with his right hand for what Brown believes is a gun. Brown fires 11 times and hits Cruz-Fuentes with nine shots, killing him.