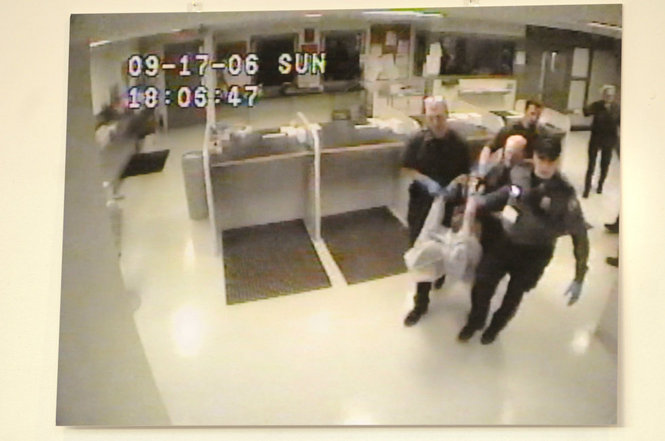 A still from the jail’s video recording shows a hog-tied, hooded James Chasse being carried in.

“WE TACKLED HIM.” The words are indistinct—sort of blurred at the edges, bleeding into one another. They are surrounded by other hazy noises, and followed by the laughter of jail deputies engaging in a bit of collegial bonhomie on a September evening.

But less than an hour later, the stakes had drastically changed from the relatively jocular moments captured in this 2006 surveillance tape. James Chasse Jr., the “him” that former Portland Police Officer Christopher Humphreys described tackling, had died in police custody from trauma likely caused by officers.

The low-quality footage is perhaps the most-candid police account we have of one of the more infamous cases in recent Portland police history.

If the Chasse incident happened today, Humphreys’ words would be lost.

The reasons are as foggy as the recordings were. The sheriff’s office says there were concerns about the cost of storing audio footage when the department switched over to digital data storage—but doesn’t have figures or documents reflecting those concerns. Surveillance experts, meanwhile, say audio takes up a relatively minor portion of most storage systems.

The sheriff’s office also points out that the old audio recordings were often very poor quality, making it difficult to determine who was speaking or what exactly they were saying. But the Chasse case stands as a stark counterpoint—an argument that even the worst recording can shed light on an urgent matter.

And cops who investigate officer misconduct say such recording is typically useful for exonerating cops and jailers of bogus claims.

Lieutenant Jeffrey Bell has worked in the Portland Police Bureau’s Internal Affairs Division for roughly a year, and says in that time he’s had one case where he’d have liked an audio file to accompany jail footage. He was unaware, until told by the [Portland] Mercury, that audio recordings had been scrapped for good.

“It doesn’t always show or tell everything, but it does provide a little bit of an involved witness perspective,” says Bell. “It doesn’t have a failing like human memories or biases.”

As the Chasse case played out—first in an investigation into the conduct of Humphreys and others, and then in a civil suit filed by Chasse’s family — Humphreys continuously denied he tackled Chasse, who officers thought looked suspicious.

Under the harsh glare of media scrutiny, depositions, and interrogations, Humphreys insisted he’d followed bureau procedure. When Chasse—slight of build and struggling with schizophrenia—ran from approaching officers, Humphreys said he ran him down and pushed him in the back, tripping Chasse and causing him to fall. Humphreys said he fell directly after, but not on, Chasse.

Witnesses meanwhile, used the term “tackle.” One man even called it a “flying tackle,” saying in a deposition, “that officer ended up on top of Mr. Chasse.” Those statements seem to agree more with what Humphreys casually said in the jail video—before the incident grew more serious when Chasse died of blunt force trauma to the chest.

“We tackled him,” Humphreys said. “He fell hard.”

“When they did that change, the cost of the storage for audio would have been cost-prohibitive,” says Alexander, noting the sheriff’s office would have had to keep years of footage on hand. “It would be huge files. They weren’t sure how effective that would be.” 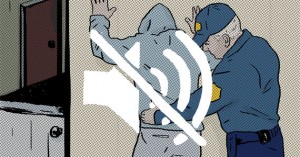 After discussing the matter with technology staffers, though, Alexander says there are no documents reflecting those conversations, and no estimates for how much the audio storage might have cost.

Which is curious. Audio storage is a relatively minor cost concern for surveillance systems in the digital age, according to Jim Weaver, president and CEO of MediaSolv. The Virginia-based company provides surveillance systems to law enforcement throughout North America—including agencies in Los Angeles, Toronto, and Chicago.

“I’m a little surprised the concern is for audio,” says Weaver. “The video is by far the much larger resource required.”

And data storage has grown cheaper in recent years, he says.

There are no rules or guidelines requiring, or even suggesting, that local jails record sound, according to Rick Neimiller, a spokesman for the American Jail Association. And no statistics exist for how many jails use audio recording.

One jail somewhat similar to Multnomah County’s, the King County Correctional Facility in Seattle, only records inmates’ phone conversations, says William Hayes, the facility’s interim director. There are no microphones in the booking area.

Weaver says Toronto police record both video and audio in their booking area.

But local law enforcement is also seeing the utility of better surveillance. The Portland Police Bureau is in the early stages of a plan to outfit all of its cruisers with video and audio recording devices. Only 10 vehicles have the equipment right now.

“There are probably police officers who don’t like being videotaped or don’t like being audio recorded,” says Bell, the internal affairs lieutenant. “But if you talk to any of the officers down at Central [Precinct] who use it, they love it. Most of the time, the information ends up exonerating the officers.”

That’s a big part of what jail surveillance is designed to do: protect officers and corrections deputies from false accusations. The Multnomah County Corrections Deputies Association, a union that represents Portland’s jail guards, didn’t return numerous requests for comment on the issue of audio recording.

One of the sheriff’s office’s concerns about its old audio recordings is absolutely true: The quality was terrible.

In order for the Chasse footage to be understood, Tom Steenson, the attorney representing the Chasse family in the civil suit, spent a lot of money having the file worked over and clarified by analysts—including former FBI employees.

“It was a very important piece,” Steenson tells the Mercury. “If nothing else, you could hear Jim [Chasse] just screaming in pain. Words weren’t important. I’m not sure he was speaking words.”

In the end, the wrongful death suit filed by Chasse’s family never went to trial. The city settled the matter for $1.6 million. Multnomah County and American Medical Response, the two other defendants, also settled.

Humphreys was never disciplined for his conduct in the Chasse case. An internal investigation into whether he’d lied by claiming he hadn’t tackled Chasse—while telling jailers the opposite—also cleared him of wrongdoing.