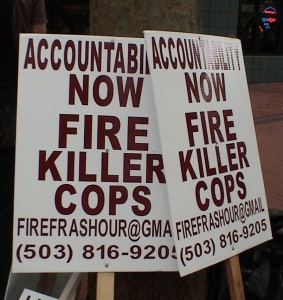 The lawyers deployed their full arsenal of legal arguments for the first time in briefs filed this week. They’re defending Mayor Sam Adams‘ unusual decision — under challenge from the police union — to buck the arbitrator’s reinstatement ruling in March.

Frashour shot Campbell in the back with an AR-15 rifle on Jan. 29, 2010, after Campbell had been struck with multiple beanbag-shotgun rounds and turned to run toward his girlfriend’s apartment building. Campbell was unarmed, but Frashour said he thought Campbell was reaching for a gun.

The mayor and Police Chef Mike Reese fired Frashour. But on March 30, Arbitrator Jane Wilkinson ordered the city to reinstate Frashour with lost wages, saying a reasonable officer could have concluded that Campbell “made motions that appeared to look like he was reaching for a gun.”

Adams decided not to follow the arbitrator’s ruling — a first involving an officer terminated for use of force. The Portland Police Association filed an Unfair Labor Practices complaint on Frashour’s behalf.

The state Employment Relations Board focuses on whether the arbitrator’s decision forces a public employer to violate public policy set out in statutes or judicial decisions, not whether the employee’s conduct violates public policy.

Police union attorneys argue that the city will lose outright on the first question because the arbitrator found Frashour acted within bureau policy.

Portland attorneys Howard Rubin and Jennifer Nelson, hired by the city to defend Frashour’s firing, argue that the board’s focus is too narrow and Frashour’s use of deadly force was unreasonable and disproportionate to the circumstances he faced.

Frashour’s reinstatement, they said, would: