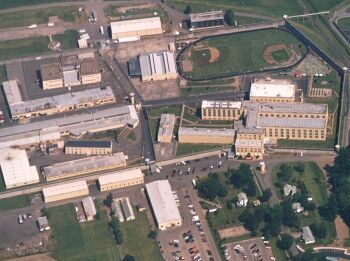 Oregon is putting the finishing touches on a gleaming new mental health hospital. The Salem facility replaces a crumbling 130-year-old building and is hailed as a new chapter in the state’s troubled history of treating people judged guilty but insane. But there are far more mentally ill people in Oregon’s standard prisons. And the inmates with the most severe mental problems are housed in a ward designed for hardened criminals. That facility isn’t designed for treatment.

This story begins last fall, when I sat down for an interview with Max Williams, Director of the Oregon Department of Corrections.

Williams was stepping down after nearly eight years on the job. He spoke to me at length about improvements in the way the agency houses and treats mentally ill inmates.

Advocates for the mentally ill have long complained that Oregon’s prison system doesn’t provide adequate treatment. Williams says he made it a priority to improve services and beef up staffing. But he left me with this warning.

“I don’t want you to think in any way, shape or form that we’ve solved the problem,” he said. “What we’ve done is we’ve done a lot of work to make things better, but it continues to remain, I think, one of the great challenges.”

So I decided to go see what life is like for mentally ill inmates at Oregon’s largest and oldest prison — The Oregon State Penitentiary in Salem. It took some time to arrange a visit. So in the meantime, I sought out Bob Joondeph, the director of Disability Rights Oregon.

He’s toured the mental health wing at the state pen. He describes it as “dark” and “confined.”

“It’s a circular unit, two tiers of cells with metal mesh across the front of them, a guard tower in the middle, no light into that unit.”

That cell block was built 20 years ago for an entirely different purpose.

“It was designed for very violent inmates that are being punished,” Joondeph explains. “And it’s now being used to house the people with the most severe mental health needs.”

Joondeph says the conditions on the unit are so bad, it can exacerbate the mental health problems of the inmates there. He says that makes it less likely they’ll come out of prison ready to function in society.

I finally got the chance to visit myself. Prison officials wouldn’t let me take along a microphone or a camera. But here’s the thing I noticed: when I talked to those officials afterwards, they used some of the same words to describe the unit that critic Bob Joondeph used.

She helped show me around one of the mental health units at the State Penitentiary. And she readily admits the facilities were not designed to house the mentally ill. During our tour we visited a narrow recreation area with a concrete floor. Eight feet wide. It’s one of the only ways for inmates there to get any natural light — and that light comes through a barred window high above their line of sight.

On the wall was an odd metal frame. It had no discernible function and stuck out so far you’d need to watch out to avoid getting whacked in the head as you walked past. I asked Russell about it later. She said an accidental bump on the skull was the least of her concerns.

“That thing, that metal thing that was on the wall. That thing would cause me concern if I had an inmate who was suicidal,” Russell says. “I wouldn’t want to put him outside unsupervised, because you could hang yourself on that.”

Just a fraction of the inmates diagnosed with mental illness are housed in the specialized wing — only those with the most severe and persistent symptoms. Russell says despite what she calls a history of under-funding mental health services, staff on the unit are doing the best they can with the resources they have.

Gabriell Gitnes manages two of the mental health wings at the State Penitentiary. She says if she had been around when the building was designed…, “Well, I think everything would have been different.”

For one thing, she says the current set-up doesn’t have much, if any, therapeutic value. “When I think of the physical environment for the people that have to live here, I think the lack of outside space, the lack of grass, is huge.”

“This is not a hospital,” she says. “We’re not a state psychiatric facility. We are a prison.”

And the prisoners here committed crimes, sometimes violent ones. Unlike patients at the Oregon State Hospital, these inmates were not judged to have committed their crime as a result of their illness. In some cases, the illness developed after they were incarcerated.

The state of Oregon is constitutionally required to treat mentally ill inmates to the same standards as they would get outside of prison. Mental health advocate Bob Joondeph say if the purpose of treatment is for people to get better, “This is the type of environment that does just the opposite.”