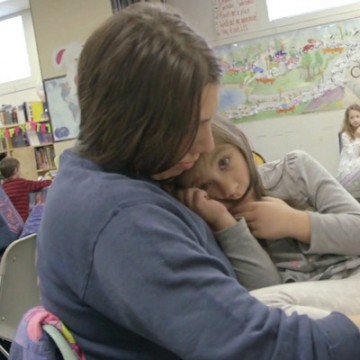 For over a decade, director Brian Lindstrom has directed captivating documentaries that challenge viewers to look at the world around them through new and more empathetic eyes.

Chilling, honest, and thought-provoking, Lindstrom’s films introduce viewers to aspects about life that they may not be familiar with.

In his 2007 work, Finding Normal, Lindstrom shows viewers a small but memorable look at what it’s like to recover from drug addiction.

Later, in 2013, Lindstrom made Alien Boy: The Life and Death of James Chasse, a film that narrates the story of a musician living with schizophrenia who was killed by officers in the Portland Police Department.

Made in early 2015, the documentary includes testimonies of families who have benefited from the Family Preservation Project, which allows incarcerated women to still have an active relationship with their children.

The film demonstrates how FPP helps families remain united in the midst of a difficult time, and how it also results in a recidivism rate of zero percent.

Despite the benefits, the state of Oregon was in the process of phasing out the program when the film was first released.

However, according to the Mothering Inside/The Family Preservation Project’s Facebook, the Oregon Legislature later had a change of heart and voted to fund the project for the next two years. In light of this, Lindstrom plans to create a new ending for Mothering Inside to reflect this triumphant news.

As a pre-screening gift, however, Brian Lindstrom was kind enough to do an interview with GoLocalPDX.

GoLocalPDX: How do you decide what stories/events to do films about?

Lindstrom: I need to feel something very important is at stake and that, if I play my cards right, the audience will get to witness a soul emerge.

You once wrote that your films attempt to answer the question “How does a person grow?” With that in mind, how do you think your film Mothering Inside answers that question?

I think growth is made possible when we stop telling ourselves the same old story that we’ve based our life on. In Mothering Inside, we see Lanetta presenting her genagram to the group. The genagram is basically a hand-drawn map of one’s life, with symbols representing the forces that have helped to shape you. Like many of the women in the Family Preservation Project, Lanetta’s family was hit hard by poverty, incarceration, abuse and addiction. And she internalized this pain and dysfunction and went about her life with the results one would expect: repeating the cycle. By doing in-depth work like the genagram, Lanetta was able to re-evaluate her life and create a story that more accurately reflects who she really is. “I’m not that person I thought I was. I’m not a drug addict whore. I can do better.” Because Lanetta created a new story for herself, her life changed. Since being released six months ago, she is working full time, taking college classes, and is a positive force in the lives of her children.

Since the original version of Mothering Inside was made, the funding for the Family Preservation Project has been renewed for the next two years. Do you think that your film helped bring about the signing of the bill that’s allowing the funding?

Yes. Audiences really respond to the inmate moms profiled in the film. They hold themselves accountable, take full responsibility for their mistakes, and do everything they can to be the best mothers–indeed the best people–they can be. Their integrity shines through. And in the film when we learn the Oregon Dept. of Corrections is closing the program, there is a sense of outrage. These women are doing all the right things–these kids are so clearly benefitting–how can the DOC close this program?

Audiences left the screenings motivated to save the program. They signed petitions, and wrote letters to legislators and the governor. And it worked. Very soon the Family Preservation Project will resume operations and continue to change lives.

In light of the bill being signed, you mentioned you were working on a new ending to Mothering Inside. When can we expect to be able to view the new version?

I’m in the process of creating the new ending. It may even be done by the August 11 screening at the Whitsell Auditorium.

What is the main thing that you hope viewers of your films will take away from your work?

It takes grit and grace to change a life, but it is possible. And we have to ask ourselves as a society: “Are we doing enough to help people who really need help?” Like the children of inmates, for example. We can do better. We must do better.