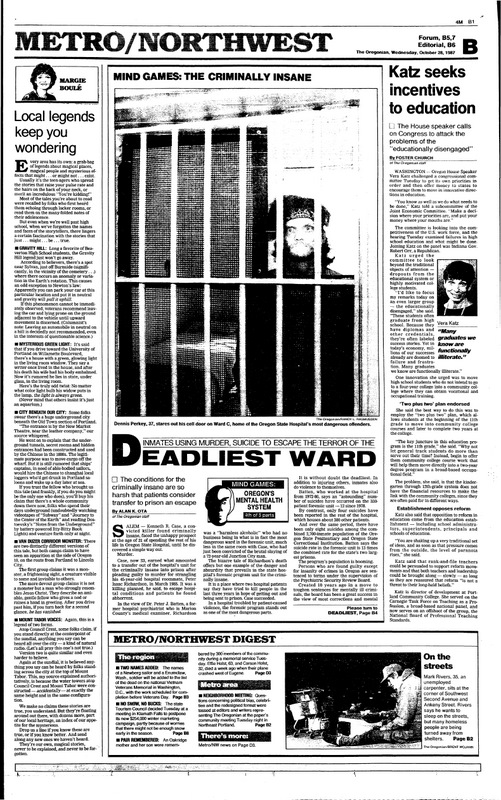 Fourth of a five part series on the Oregon State Hospital
From The Oregonian, October 28, 1987 – not available elsewhere online

Kenneth R. Case, a convicted killer found criminally insane, faced the unhappy prospect at the age of 21 of spending the rest of his life in Oregon State Hospital, until he discovered a simple way out.

Case, now 23, earned what amounted to a transfer out of the hospital’s unit for the criminally insane into prison after pleading guilty to murder for strangling his 45-year-old hospital roommate, Peter Isaac Richardson in March 1985. It was a killing planned, he said, to escape hospital conditions and patients he found abhorrent.

In the view of Dr. Peter J. Batten, a former hospital psychiatrist who is Marion County’s medical examiner, Richardson was a “harmless alcoholic” who had no business being in what is in fact the most dangerous ward in the forensic unit, much less in the same room with Case, who had just been convicted of the brutal slaying of a 72-year-old Junction City man.

The bizarre tale of Richardson’s death offers but one example of the danger and absurdity that prevails in the state hospital’s forensic program unit for the criminally insane.

It is a place where two hospital patients say they have tried to kill people in the last three years in hope of getting out and being sent to prison. Case succeeded.

In a hospital troubled by patient-caused violence, the forensic program stands out as one of the most dangerous parts.

It is without doubt the deadliest. In addition to injuring others, inmates also do violence to themselves.

By contrast, only four suicides have been reported in the rest of the hospital, which houses about 380 other patients.

And over the same period, there have been only eight suicides among the combined 2,700-inmate population of the Oregon State Penitentiary and Oregon State Correctional Institution. Batten says the suicide rate in the forensic unit is 13 times the combined rate for the state’s two largest prisons.

Batten said the suicides raised questions about the staffing for the unit and its anti-suicide procedures.

Details of the suicides themselves depict a place where just about anything can happen, and sometimes does.

In at least one case, circumstances surrounding one of the suicides were so suspicious that the Marion County district attorney’s office called for an inquest, an unusual hearing held to determine whether a death is a homicide.

David Leaf, 45, died of asphyxiation while strapped down on a bed in an isolation room in October 1981. A pathologist found a 12-inch by 7-inch piece of brown terrycloth stuck in the airway in Leaf’s throat. The inquest jury concluded that Leaf purposely tried to swallow a piece of his terrycloth shirt, which lodged in his throat, all while his wrists and ankles were loosely strapped to a cot in a seclusion room.

In another case, Miguel Hernandez hung himself after receiving what a roommate called “help.” In a signed statement to Oregon State Police, the roommate said he helped put a makeshift noose around Hernandez’s neck and then pulled a table out from under him, allowing him to commit suicide. No criminal charges were brought.

Interviews with present and former state hospital employees, patients and families of patients portray the forensic unit as a place where the criminally insane face long terms in conditions so crowded that their safety cannot be guaranteed.

“The living conditions are terrible,” acknowledges Roger Smith, who served as director of the state’s forensic psychiatric program for two years until resigning in August to take a federal government job.

Employees say they are too few to see, much less prevent, violence or even to defend themselves.

“It seems like getting hurt is part of the job,” said Steve Krank, security aide supervisor who has been bitten, punched in the face and gotten three cracked ribs in the last five years.

Some of the most acute problems occur on Ward 48C. Of two maximum-security wards, 48C holds the most dangerous clients. Both security wards also serve as the two “admissions” wards for the program.

That designation means that the most violent and dangerous patients in the forensic program — including men who have committed heinous murders — share space with patients convicted of such lesser crimes as trespassing, or who are convicted of nothing. Many of them are accused of crimes but have been found mentally unfit to be tried.

The maximum security wards and a ward for sex offenders are located in an older three-story wing of the hospital, known as the “48 Building.” The other four wards, which are medium security, are housed in a six-story building a short distance away.

Richardson died on 48C, and four of the nine suicides since 1982 have been here.

Richardson’s murder came on March 19, 1985, only 11 days after he was admitted for the 20th time to Oregon State Hospital. Batten called him an alcoholic in a weakened condition and unable to defend himself. Records released by the hospital said Richardson was put on the maximum-security ward because of “physical aggressiveness” and “inappropriate familiarity with female patients and staff.”

“He was considered a harmless alcoholic,” Batten , the medical examiner, said of Richardson. “He had no reason to be over in the forensic unit. Of course, if he hadn’t been there, he would not have been killed. Peter was in the wrong place at the wrong time.”

Smith said the population of the forensic program wards were often a bad mix of two distinct, and often incompatible groups: those who typically are quite docile when under medication, and those long-term dangerous, criminal offenders, whose mental ailments often cannot be controlled by medication.

“We just don’t have the facilities to segregate the two,” Smith says.

The program’s population is booming.

Persons who are found guilty except for insanity of crimes in Oregon are sentenced to terms under the supervision of the Psychiatric Security Review Board.

Created 10 years ago in a move to toughen sentences for mentally ill criminals, the board has been a great success in the view of most corrections and mental health experts in Oregon.

Typically, the criminally insane are housed at the Oregon State Hospital. The board may discharge patients early only on conditional release when they are deemed mentally fit and no longer dangerous.

Under the board, the average criminally insane defendant spends 2.4 years in the state hospital — nearly double the 1.3 years that the average state prison inmate stays behind bars.

But in holding the insane longer and protecting the public, the board is creating a logjam at the state hospital.

“It’s such a good thing that it’s become a monster,” says Dr. Prasanna K. Pati, who served as the forensic unit’s director until 1985 and who retired from the state hospital last year.

Over the last decade, the forensic program’s population has more than doubled. The state has added three new wards in the unit since 1985 and plans to add another soon. A recent state study concludes that a new ward will be required every 18 months.

The board’s tougher sentences may be pushing some mentally ill criminals into prisons and jails.

Jim Henning, executive director of the Metropolitan Public Defender’s office in Portland, said indigent clients represented by his office began opting against using the insanity defense soon after the security review board was created and began began stiffening terms.

“Insanity defenses were never frequent,” he said. “Now, they are even less frequent.” He said some clients believed they would get more lenient terms from the State Board of Parole, and opted against pleading insanity.

Crowding in the forensic unit — which now holds about 20 more patients than its budget allows — has been compounded by a dearth of community programs to house conditionally released patients.

The board monitors 118 criminally insane patients in such programs. The state plans to add 50 conditional releases to help relieve the state hospital glut.

Mary Dolan, who has just been hired to find beds for the conditional releases, says private contractors are worried about potential liability for misdeeds.

Such concerns were heightened by the case of William K. Maude, 31, who was on conditional release under the security board when he killed his mother in Portland in August 1984.

The family sued the Salem group home where he had been living, the state and Marion County for damages. No negligence was found, but the case sent a chill through the mental health system.

In the hospital, the criminally insane residents of “48C” routinely complain about the strictness of the board’s sentences. Some like Roger Martin, 38, who is serving time for burglary, say they don’t belong there.

“I faked my way in here, and now I can’t get out,” said Martin, who arrived in 1985. “There are dangerous psychotic people here. They strike out for no reason here, for nothing.”

Martin has filed suit against the Security Review Board seeking to be released on grounds that he is not mentally ill.

A hospital psychiatrist says that Martin suffers from an “antisocial personality.”

Others talk of violent deeds or escapes that they hope will free them, or perhaps result in a transfer to prison, although only two actually have carried out such plans.

Over the last two years, the hospital’s forensics staff has repeatedly warned managers at Oregon State Hospital that crowding endangers the lives of patients and employees.

“The Forensic Psychiatric Program is so overcrowded, most wards have reached a position of being dangerous and unmanageable. There are incidents taking place throughout the program,” one hospital memorandum warned last January.

Inmates also complain about the lack of activities and programs. On 48C, for example, it is common to find inmates who spend long hours lounging in the rooms and walking a long corridor. Jerry McGee, the former Fairview Training Center superintendent who was named the forensic program’s director in August, said, “Our greatest concern with safety In fact, there were indications that a murder like the one committed by Case would actually take place, long before it occurred.

Case and Thomas F. Grenfell, another patient who admitted conspiring with Case to kill Isaacson, were well known to the state as dangerous killers.

On July 6, 1984, Grenfell, who was serving time for killing a prison guard, stabbed a hospital barber in the arm with a pair of scissors.

According to a hospital report written in November 1984, Grenfell told a staff employee just after the assault that he believed he would be transferred to prison and released earlier if he “killed someone here.”

Eight months before the murder of Richardson, on July 18, 1984, Case was released from the forensic program at Oregon State Hospital. He was transferred to the unit in the first place from Dammasch State Hospital in Wilsonville after allegedly assaulting a woman custodian.

Two days after getting out of Oregon State Hospital, he beat to death George Irvin, 72, outside a Junction City bar. After being found guilty except for insanity of Irvin’s murder, Case was returned to the hospital in October 1984. He strangled Richardson about six months later.

Both Case and Grenfell confessed to planning the Richardson killing.

But Case told a different story four days later. He said that he alone killed Richardson because he was a bothersome roommate who cried, talked to himself and failed to clean up urine that he spilled. Grenfell then recanted his confession.

Grenfell acknowledged that he taught Case how to use a “Japanese sleeper hold” on the day before the murder and agreed to help kill Isaacson. But Grenfell denied any part in the actual killing, in which Case said he strangled Richardson with the hold then jumped off his bed onto Richardson’s chest three times.

Case pleaded guilty to murder, and was sentenced to life in prison for Richardson’s killing. After he finishes his life prison term, however, he’ll be back under the Psychiatric Security Review Board’s jurisdiction for the remainder of his life plus 20-year sentence in the Junction City killing.