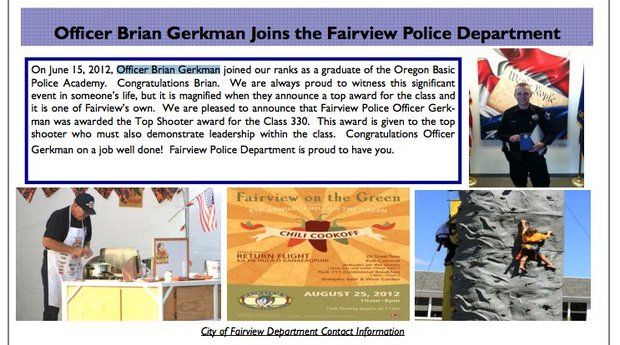 A rookie Fairview police officer who shot a man during a welfare check early Tuesday recently had been cleared in another shooting 22 days earlier.

Officer Brian Gerkman, 24, was placed on administrative leave this week after the confrontation at the Fairview Oaks-Woods Apartments complex at 22719 N.E. Halsey St.

Gerkman graduated from the Oregon Basic Police Academy in June 2012, according to a city newsletter that described him as “one of Fairview’s own.” He was awarded the “Top Shooter” award for his class, an honor bestowed on the best marksman who also demonstrates leadership.

Fairview Police Chief Ken Johnson said Gerkman was dispatched to Apartment 104 along with two Multnomah County deputy sheriffs sent to assist him in checking on a report of a man acting strangely, either as a result of mental health issues or drugs.

A resident allowed the officers to enter the apartment, where Gerkman and Deputies Pete Reed and Kevin Baird made contact with Tyler Brown, a visitor from Federal Way, Wash.

While they were assessing the situation, Brown dashed into the small kitchen and grabbed a large kitchen knife, the chief said.

Gerkman drew his duty weapon and ordered Brown to drop the knife, Johnson said. The men were standing close to one another, Johnson said. Brown lunged while “holding the knife in a threatening manner,” he said in a news release.

After being shot, Brown struggled with officers as they tried to give him first aid. Brown was taken to a hospital and has been upgraded to stable condition.

It was the Fairview Police Department’s second officer-involved shooting in the past month and Gerkman was involved in both, Johnson said.

He elaborated on that shooting for the first time Thursday.

On Nov. 11, when Gerkman tried to stop a Chrysler 300 with stolen license plates for traffic violations near Northeast 223rd Avenue and Northeast Townsend Way, the driver fled.

Gerkman pursued the sedan down a dead-end road, the chief said. The driver turned his car so it was facing Gerkman’s police car, then stopped.

Fearing he was going to be struck and killed, Gerkman fired one round at the car when it was a few feet away, striking the hood. The driver swerved and missed the police officer, who jumped back in his patrol car, radioed for backup and continued the pursuit.

The suspect, while speeding, struck a Multnomah County sheriff’s patrol car at Northeast 223rd Avenue and Sandy Boulevard, injuring a deputy and a seriously injuring his own passenger.

Gerkman was placed on administrative leave after the incident, a standard procedure in officer-involved shootings. Since no one was injured or killed, Gerkman was returned to duty on Nov. 13. A grand jury found that the driver, 30-year-old Richard James Rummery, had unlawfully used the Chrysler 300 as a weapon against the Fairview officer, Johnson said. Rummery faces a series of charges, including third-degree assault and reckless driving.

Johnson determined that Gerkman had acted within Fairview Police Department policy and his use of force was justified.

Fairview police hired Gerkman on Feb. 1, 2012, according to Johnson. Gerkman also served as a Fairview reserve police officer and as a cadet for the Gresham Police Department.

Gerkman is back on administrative leave pending decisions from a grand jury and the Fairview Police Department Use of Force Review Board, which will determine whether he acted within department policy.

It is the third shooting for the nine-officer department since Jan. 27, 2012. Last year, Fairview Officer Mike Morton, a 15-year-veteran, shot Larry M. McKinney as he stood holding a carving knife at the door of his mother’s apartment. A grand jury cleared him of criminal wrongdoing and Johnson declared the shooting justified after his own investigation.

“This is a huge anomaly for any agency, let alone for an agency of this size,” Johnson said. But Gerkman’s involvement in the current shooting will be investigated separately from his earlier incident.

“The fact that he’s been involved in two incidents, each should be regarded independently,” the chief said.