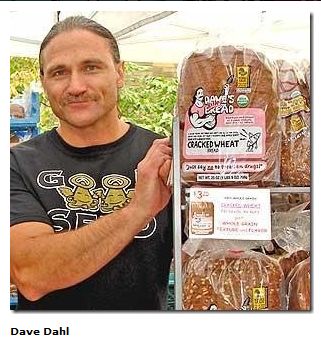 In better times, Dahl showed off his Killer Bread

Dave Dahl, co-founder of Dave’s Killer Bread arrested last fall for ramming two Washington County sheriff’s patrol cars with his Cadillac Escalade, has reached a deal with prosecutors that will find him guilty except for insanity, according to a document filed by his lawyer.

Dahl was scheduled to appear in Washington County Circuit Court today for a stipulated facts trial—one in which a judge considers evidence agreed to by both the prosecution and defense. The trial has been rescheduled for Friday, Oct. 17.

“It will become clear that the state and defense do not agree on all aspects of what transpired Nov. 14, 2013,” Houze writes. “There is, however, a core of certain agreed upon facts to support a finding of guilty except for Insanity.”

Houze’s memo goes on to say that Dahl was not under the influence of drugs when he attacked police. “His blood alcohol content testing revealed a low level of .04%.

“This unfortunate incident was the product of a previously undiagnosed Bipolar I condition,” Houze continues, “as well as tactical decisions made by officers who responded to a request for assistance with his mental health crisis. On that day, Mr. Dahl was in a severe manic/psychotic state of mind, later diagnosed as Bipolar I, currently manic, severe, with psychotic features.”

WW reported in January that Dahl’s breakdown followed two years of increasing reliance on alcohol, even as Dave’s Killer Bread continued to market his redemption from meth dealing and prison.