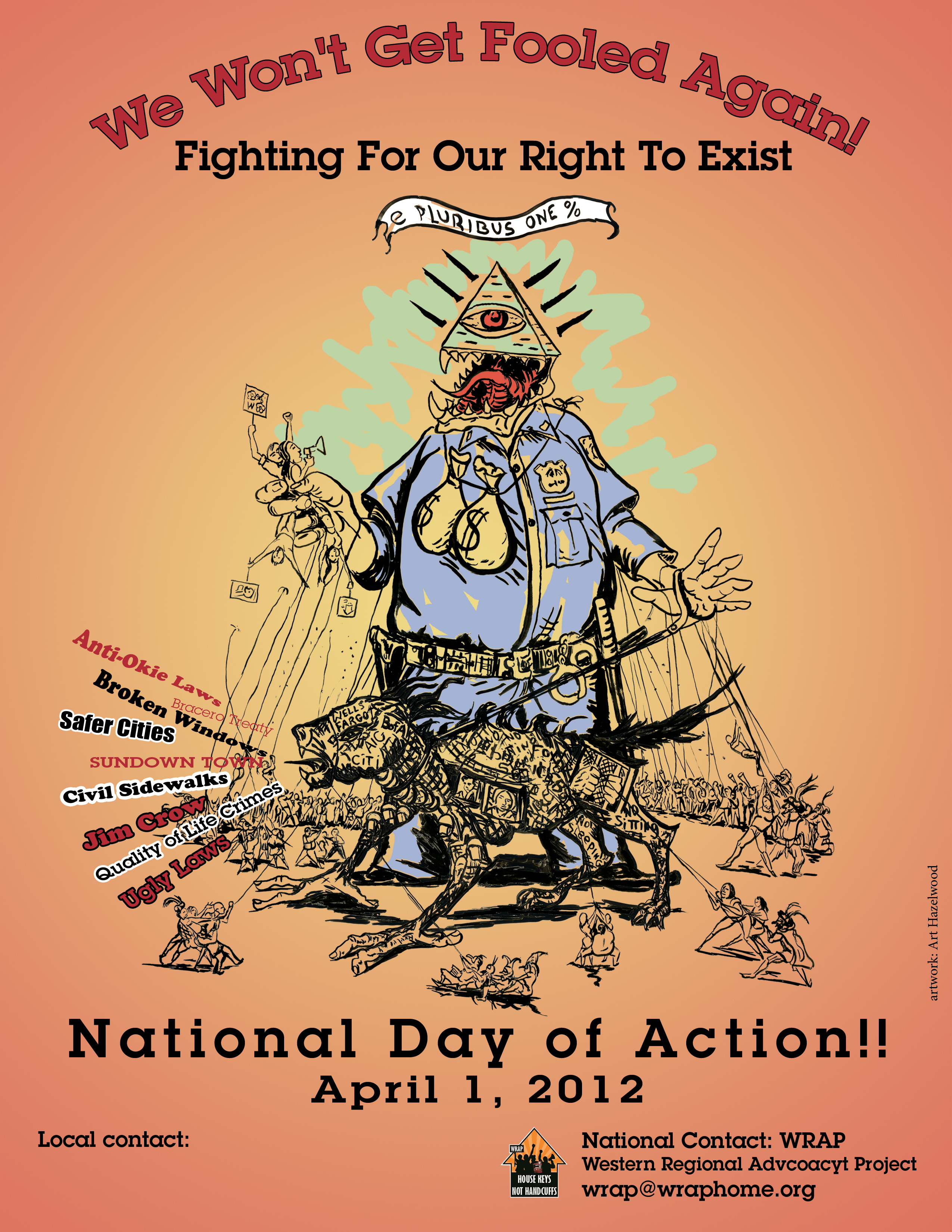 The Western Regional Advocacy Project (WRAP) and the USA-Canada Alliance of Inhabitants (USACAI) are calling on our members and allies throughout the United States and Canada to join us on April 1 for a bi-national day of action against the ongoing criminalization of poor and homeless people in our communities. Stay tuned for information on Portland’s action led by Sisters Of The Road, Right 2 Survive, and Street Roots.

We are building a movement to reclaim our communities for all members, not just those who set the rents. In order to build this movement and assert our human rights, we must make clear the myriad ways in which our community members are treated as though they are less than human. We must connect the dots.

Over the past 30 years, neo-liberal policy-makers have substituted private gain for public good; they have abandoned economic and social policies that supported housing, education, healthcare, labor, and immigration programs. WRAP and USACAI are at work identifying and tracking such policy, legal, and funding trends in order to publicize their spread and their effects. This is not a matter of theoretical analysis, this is an investigation of the policies and tools by which more and more people have been made to suffer.

Three decades ago, the deregulation of financial industries came simultaneously with the withdrawal of government support for affordable housing. Just since 1995, the United States has lost more than 290,588 existing units of public housing and 360,000 Section 8 units, with another 7,107 approved for demolition/disposition since March of 2011. Some 2.5 million foreclosures have taken place since 2007, an additional 6.9 million foreclosures have been initiated, and a projected 5.7 million borrowers are at risk.

In those same 15 years, more than 830,000 new jail and prison cells have been built, draconian immigration laws and eligibility screening criteria have been implemented in housing, healthcare, education and jobs programs, and America’s three largest residential mental health facilities are now all county jails (Los Angeles, Chicago, and New York).

A New Wave of Criminalization

1982 marked the beginning of homelessness as a “crime wave” that would consume the efforts of U.S. police forces over the next three decades. Crime statistics show that across the country, millions were sitting, lying down, hanging out, and — perhaps worst of all — sleeping. To take one city as an example, by the end of 2011, these new crimes comprised roughly one-third of all prosecuted offenses in San Francisco.

We all suffer from governments that waste resources and refuse to develop real solutions to social problems, but the people whose survival is criminalized suffer the most.

Over the past year, WRAP has led a survey effort with its West Coast grassroots members and allies in Portland, Berkeley, San Francisco, Los Angeles, Seattle, Denver, Houston and Worcester, Mass. documenting homeless people’s experiences with the criminal justice system for survival-related “crimes.” The USA-Canada Alliance of Inhabitants has helped WRAP take this effort nationally by reaching out to their members and surveying homeless people in cities throughout the U.S. on these issues. Survey forms in English and Spanish are available if your organization wants to help build on this initial effort. WRAP is now releasing preliminary results from discussions with more than 668 people.

More than three-quarters of survey respondents (78 percent) reported being harassed, cited or arrested by police officers for sleeping outside. Seventy-five percent reported the same for sitting or lying down, and 76 percent for loitering or simply “hanging out.” These were by far the top crimes for which homeless people were charged. A sad corresponding fact is that only one quarter of respondents (25 percent) believed that they knew of safe, legal places to sleep. In California, the public lodging law makes sleeping outside always illegal for homeless people. The law, by its nature, makes a large class of poor people inescapably criminal.

It can feel easy to scoff at these crimes: most of the relevant laws are summary offenses (“infractions” in California; “violations” in some other states), which means that they can’t directly result in any jail or prison time. However, 57 percent of respondents reported bench warrants issued for their arrest as a result of these citations. That is, if they couldn’t afford to pay the fines that these tickets carried, or if they were unable to make court dates, then they became subject to arrest.

Using the Word “We”

Core to our success in this survey research was the active, engaged outreach of volunteers from nearly a dozen different organizations throughout the United States. Using an organizing method that WRAP members have developed and polished on the streets of West Coast cities, they were able to procure good information, and, far more importantly, begin important conversations within our communities about the real nature of criminalization and its impacts. By seeking out homeless people in the places where they really spend time and engaging our communities on their own terms, we were able to develop true, communal knowledge, founded in collective experience, and we are able to use the term “we” to talk about our communities in ways that isolated “experts” never can. We are organizing in a more honestly democratic way.

This is not about caring for or even advocating for “those people.” This is about all of us. As Aboriginal leader Lilla Watson said, “If you have come here to help me, you are wasting your time. But if you have come because your liberation is bound up with mine, then let us work together.”

The rise of repression in the United States and Canada is a war against all of us. We need all of us to act in this struggle for dignity, fairness, and human rights. The people who pay for and profit from the criminalization of homeless people are the same people who benefit from our nation’s refusal to meet basic human needs. They are using these laws to do what invading armies do: they attack us at our most vulnerable flanks — the communities of poor and homeless people who have been subjected to shame and blame for decades.

If you are not homeless, if you are not the target now, then understand that you are next. Isolated and fragmented, we lose this fight. But we are no longer isolated.

We can only win this struggle if we use our collective strengths — organizing, outreach, research, public education, artwork, and direct actions. We are continuing to expand our network of organizations and cities and we will ultimately bring down the whole oppressive system of policing poverty and treating poor people as “broken windows” to be discarded and replaced.

Since September 2010, the Western Regional Advocacy Project and allies in eight other cities across the U.S. started compiling information from homeless people about their daily interactions with local police, private security guards, and the criminal justice system.

Phase 1 of this outreach effort focused on speaking with 336 homeless people self-identified as mentally ill. In phase 2, we spoke with an additional 332 homeless people, who did not necessarily identify as having a mental illness.

In all, we were able to document the experiences of 668 homeless people, all answering a consistent set of questions. All did so only for the opportunity to speak “unfiltered” to the broader community about what is really happening on our nation’s streets to poor, disabled, and homeless community members. This is an important opportunity to lay the foundations for a national organizing campaign.

There can be no more denying that “Broken Windows,” “Quality of Life,” “Civil Sidewalks,” “Public Commons for Everyone,” and “Safer Cities” initiatives are anything less than a reincarnation of “Ugly Laws,” “Anti-Okie laws,” “Sundown Towns,” “Bracero Treaty,” and “Jim Crow” when you hear directly the voices of those who are the targets of today’s laws and campaigns.

The main “illegal offenses” that homeless people are being targeted with:

Do you know of places where it is safe and legal for you to sleep outside?

Do you think that you have been ticketed because of your:

Have you ever seen or encountered private security guards hassling people, ordering people away, or otherwise policing public sidewalks or parks?

Compiled by the Western Regional Advocacy Project (WRAP). Street Roots, Sisters Of The Road, and Right 2 Survive are all current members of WRAP. The organization is made up of grassroots homeless organizations up and down the West Coast.