Portland filmmakers set out to document the life and death of James P. Chasse Jr. 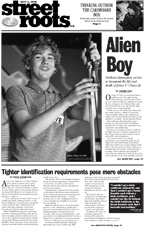 On Sept. 17, 2006, in a tony Pearl District neighborhood, in the sights of police officers who saw something they viewed as “odd,” James P. Chasse Jr. stepped out of time. He was no longer in the Portland of his youth, and he wouldn’t live to see the city that might someday come to understand him.

In that moment, this odd-looking 42-year-old was chased by police, tackled to the ground, Tasered, hogtied, taken to jail, and placed in a holding cell. Less than half an hour later, he was shuttled to a hospital — by the arresting officers — after a jail nurse determined he needed medical care. He arrived dead at Providence Hospital with 16 broken ribs, a punctured lung and massive internal bleeding.

He was not a transient, nor was he violent or an illegal drug user, as was first suggested. He had a home, immense artistic talent, an active spiritual life and schizophrenia.

The story of Chasse’s life, and the circumstances surrounding his death, are the subject of a new feature-length documentary, “Alien Boy,” which is set to begin filming in mid-May. At the helm is director Brian Lindstrom, a Portland native whose film “Finding Normal” is receiving critical acclaim for its portrayal of recovering drug addicts in Central City Concern’s mentor program. In its initial showings across the country, Lindstrom says “Finding Normal” is striking a common chord among audiences about humanity in the misunderstood world of addiction and recovery. It is a chord he hopes to strike again with “Alien Boy,” this time about mental illness.

“I was fascinated by Jim’s earlier life, and I was also extremely interested in the onset of his mental illness, and the kind of gradual isolation that that seemed to create,” said Lindstrom. “I think that if people can understand Jim as a young person, with his incredible energy and creativity and artistic talent, they can see the kind of isolation that he had to deal with later in his life, and I just think it will be a very poignant story and help us explain how we deal with the mentally ill.”

Collaborating with Lindstrom on the project is Portland Mercury reporter Matt Davis, who has doggedly covered the Chasse case in print and blog reports. Davis also has become a student of Chasse’s life, following his career in Portland’s counterculture music scene of the 1980s. Chasse sang in a punk band and created his own punk zine, Organizm, covering the local music scene. The title of the documentary is taken from the punk classic of the same name written about Chasse by the Portland band the Wipers.

“We want to show what happened to him, we want to show why Jim was an important person and not just a nobody,” Davis said. “He was sophisticated, he had a lot of impact on a lot of people. And that’s not just ‘Alien Boy.’ He had friends, he was a poet, he made magazines, he was a significant person. The kind of person that if I knew in college or high school, I would have found really inspiring. He would have had a real impact on me, a person. I would have liked to have hung out with.”

Davis continues to monitor the case now as it waits the outcome of a civil lawsuit filed against the city by the Chasse family. In October 2006, a Multnomah County grand jury found the officers involved, Portland Police officers Christopher Humphreys, Sgt. Kyle Nice and Sheriff Deputy Brett Burton not criminally liable for Chasse’s death. Davis has been unabashed in his contempt for police union protectionism and his desire to see the police officers involved with the Chasse arrest fired.

“I want people to be aware of the silencing that goes on around issues like this, and the way that they’re played and manipulated to avoid the attention on what’s really important, which is firing the individual officers who were involved.”

As much as the documentary will focus on Chasse, it is also about the changes Portland has experienced in his lifetime, according to Lindstrom, who thinks that it is more than incidental that Chasse’s end begins in the Pearl District.

“The gentrification plays a role in all of this,” says Lindstrom. “He was first spotted by the police on the corner of 18th and Everett, and then, in pursuit, he ended up near Blue Hour in the Pearl District, and it seems like this is a collision between the Pearl District and Old Town. What does it mean when an industrial neighborhood becomes an upscale Soho of Portland? I don’t think this would have happened 10 years ago. I think if you take gentrification out of this story, Jim is not even arrested that day and his life goes on.”

Jason Renaud, a mental health advocate and founding member of the Mental Health Association of Portland, went to high school with Chasse. Within days after Chasse’s death, Renaud’s organization was speaking with the mayor’s office about how to proceed: apologize to the family; create a committee with the community to make sure it doesn’t happen again; make crisis intervention training mandatory for all patrol officers; and fire the officers involved. All but the last request was fulfilled within a month, said Renaud said, who is working as a consultant on the film.

As Chasse’s illness progressed, Renaud saw how he lost friends and became more isolated. But Chasse maintained his independence, living in a one-room apartment and staying on medications to manage his illness. It was an existence that a man in his condition wouldn’t have had only a few decades ago, Renaud said. For Renaud, the responsibility lies squarely on the three officers involved in Chasse’s arrest, not the mental health system.

“James was an example of how the mental health system worked really well,” says Renaud. “James was really sick. And 20 or 30 years ago, James would have spent his life in an institution, heavily drugged, often restrained, away from his friends and family, away from the library he loved, the music he loved, the people he enjoyed being around. Because of our outpatient mental health system and better medication, and because of our generous housing system, Jim was able to live independently, live alone, and care for himself, which he was able to do for the most part. That would have all been gone 20 years ago without this mental health system. He was a big success. Even though he had really bad times, and when people look at the way he looked or the way he acted, they’d see someone who was very ill, he would have been much more ill without this system.”

Ultimately, Renaud thinks the movie will have an upbeat message; one that shows the response of the city to date, and what still needs to be done, including creating a sub-acute care facility that could take people in crisis.

“It’s Jim’s legacy that these things occurred. I don’t think Jim was a mental health advocate, he was not a person who spoke out about anything except his undying love of the Velvet Underground. He was a very shy, very frightened person who had a strange gift and had a hard time sharing it with people.

Lindstrom hopes the film goes beyond words and images and prompts action.

“It can be a model of how a city reacted to this terrible tragedy,” Lindstrom says. “And also make sure that, God willing, nothing like this will happen again.”